How to Care for a Cast Iron Pan 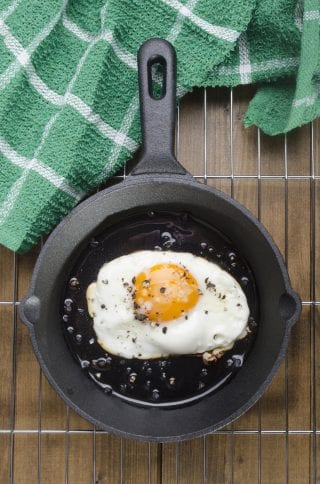 We publish lots of tasty recipes on the WeightWise blog. Most of our recipes are easy to make. We strive to keep things simple, and you can make cooking even more enjoyable by using the right tools.

A cast iron pan in your toolkit gives you an advantage after weight loss surgery. A seasoned cast iron skillet is perfect for cooking meat, a crucial ingredient in a low-carbohydrate diet.

Cast iron pans were used every day by our grandparents. In recent times, however, these kitchen heavyweights have been replaced by nonstick cookware. But, there’s a renewed interest in cast iron. Some people don’t like the chemicals associated with nonstick coatings on cookware. Others want to recapture old ways of food preparation.

If you’ve never used a cast iron pan, you might think they’re too much trouble. Maybe you’ve heard that they require special care or require loads of fat. It’s true that cast iron takes some getting used to, but here’s a secret: Once they’re seasoned, they’re easy to use.

Use a cast iron pan to cook nearly anything. They hold heat, don’t have the hot spots and last forever. They’re ideal for frying, sauteing, simmering and roasting in the oven.

How to Care for a Cast Iron Pan

If you buy a new cast iron skillet, look for one that’s already seasoned. Start using it to cook meat. The fat in the meat will continue to season the interior of the pan. When you use your cast iron pan often, it builds a patina that is nearly nonstick.

How to clean a seasoned pan:

When the pan is new, food will tend to stick the first few times you use it. If you wash the pan with soap, it will never build up a nonstick surface.

Taking Care of an Old Pan

If someone gives you an old pan, it might already be seasoned. Before using, rinse the skillet with hot water. If the pan is sticky, it means dust is clinging to oil on the pan. Here’s what to do:

The sticky substance will be gone, but you’ll need to season the pan again.

How to Season a Cast Iron Pan

This is an easy one-time task:

To build the patina, start cooking something with fat. Use your pan often to keep it in good shape.