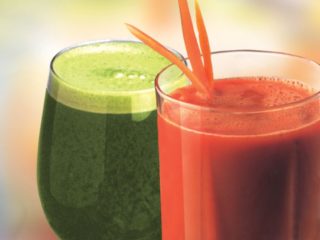 Chances are you have heard about juicing. Recently, juicing has become a popular method of consuming fruits and vegetables. It is the buzz word among celebrities and probably the most popular fad diet around right now. If you haven’t tried it, you may be wondering what the buzz is about, and if juicing is a healthy, sustainable practice or merely a fad.  We want to give you good, reliable information here at WeightWise…so here is the lowdown on juicing.
By definition, juicing is the act of mechanically extracting the juice from fruits or vegetables, while leaving the fibrous, solid matter behind. The premise behind juicing stems from the idea that it is easier to drink produce in the commonly recommended amounts than it is to eat them.
Nutritional Perspective on Juicing

Drinking the juice from vegetables and fruits is not the same nutritionally as eating them. First, juicing gives you all of the calories from the food without any of the satiety or fullness. Controlling hunger plays a major part in sticking with any diet plan. Any food or beverages that adds additional calories without promoting fullness should be avoided. Secondly, during the process of juicing, fiber is removed and discarded. This is one of the benefits of eating fruits and vegetables. Fiber can aid in digestion and better bowel function.

Juicing after a bariatric surgery may also lead to unwanted habits. We recommend that our patients do not drink with their meals or for one hour after eating any meal. This means that the juice would have to be consumed between meals, instead of within their regular meal pattern. This process can lead to snacking or grazing, which is shown to lead to unwanted weight gain.

Recommendations for Juicing The team here at WeightWise wants you to be healthy and successful long term. We recommend that juicing should be avoided.  Rather, consume your fruits and vegetables whole as part of your regular meals.